The Bald Eagle has been the national emblem of the United States since 1782 and a spiritual symbol for native people for far longer than that. These regal birds aren’t really bald, but their white-feathered heads gleam in contrast to their chocolate-brown body and wings
Bald meaning derived from Greek phalios having a white spot.
"Burkes Garden has an ongoing (years) nest that can be seen from Burkes Garden General Store parking area. It is located on James Hanes' property (Hanes Underwear)."

Posted by Birding in Tazewell at 2:58 PM No comments:

Double-crested Cormorants are large waterbirds with small heads on long, kinked necks. They have thin, strongly hooked bills, roughly the length of the head. Their heavy bodies sit low in the water.
Double-crested Cormorants float low on the surface of water and dive to catch small fish. After fishing, they stand on docks, rocks, and tree limbs with wings spread open to dry.

"This immature Cormorant was seen on the Clinch River (North Tazewell) in the latter part of July, 2015. It may be an early migrate from the breeding grounds near the Great Lakes" 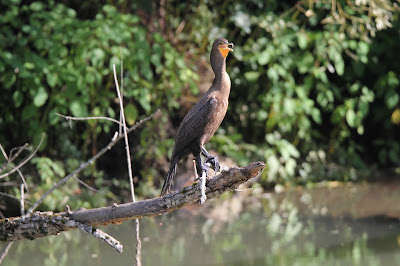 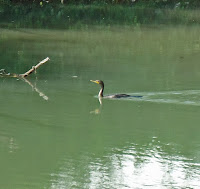 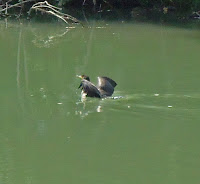 Posted by Birding in Tazewell at 9:33 AM No comments:

Most Red-tailed Hawks are rich brown above and pale below, with a streaked belly and, on the wing underside, a dark bar between shoulder and wrist. The tail is usually pale below and cinnamon-red above, though in young birds it’s brown and banded. “Dark-morph” birds are all chocolate-brown with a warm red tail. “Rufous-morph” birds are reddish-brown on the chest with a dark belly.
"The following Red-tails were seen scouting for escaping rodents while hay was being baled in Burkes Garden, Va. (July 25, 2015)" 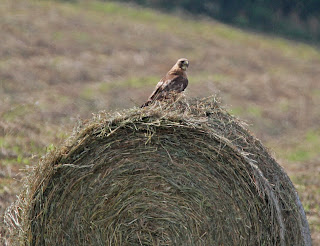 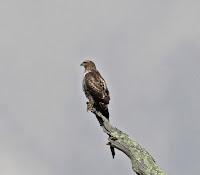 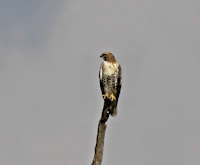 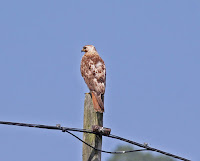 Posted by Birding in Tazewell at 6:36 AM No comments:

The elegant Great Egret is a dazzling sight in many a North American wetland. Slightly smaller and more svelte than a Great Blue Heron, these are still large birds with impressive wingspans. They hunt in classic heron fashion, standing immobile or wading through wetlands to capture fish with a deadly jab of their yellow bill. Great Egrets were hunted nearly to extinction for their plumes in the late nineteenth century, sparking conservation movements and some of the first laws to protect birds.

"The Great Egret's summer vagrant migration in Tazewell County usually begins the latter part of July. 'Vagrant Migration' refers to the northward movement of birds that were reared in the south (Gulf Coast in this case) of the current year. They are normally the young that were forced to find new feeding grounds. They will continue to move northward if the newly found food source will not support the numbers. As the temperatures drop, the return southward migration to the Gulf will begin (normally in October for Tazewell County)."

Early settlers in the 17th, 18th, and 19th centuries were dependent on wild game for meat year round due to inadequate methods of food preservation. Wild turkey and other game were staple food items for settlers who explored and developed the Virginia countryside. But with increasing colonization, wild game was also hunted professionally and sold at markets to feed the growing human population in larger towns and cities. Wild game meats were sold in quantities comparable to domestic animals, and at a fraction of the cost of domestic meats.

Early settlers survived by taming the land with ax and plow. Forests were cut to make way for agricultural production and lumbering. By the turn of the 20th Century the landscape of Virginia had changed significantly from the days when settlers first arrived at Jamestown. The extensive forests that were havens for wild turkey and other wildlife were gone. Most forests had been cut for lumber or to developed as agricultural lands for crops or grazing domestic animals. These changes in habitat conditions, combined with market hunting, led to the disappearance of wild turkeys from 2/3 of Virginia and they had become rare in other sections. Populations of wild turkeys in Virginia were probably at their lowest during the period from 1880 to 1910.

These big, spectacular birds are an increasingly common sight as flocks stride around woods and clearings like miniature dinosaurs. Courting males puff themselves into feathery balls and fill the air with exuberant gobbling.

"The turkeys were strutting their stuff on March 19, 2015 near Lincolnshire Park, North Tazewell" 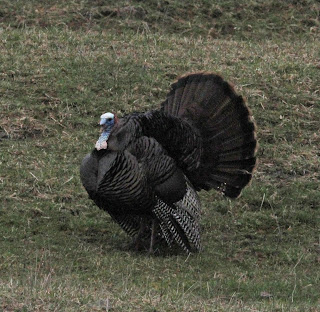 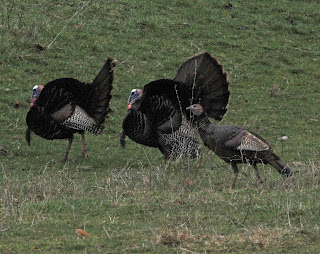 Posted by Birding in Tazewell at 7:34 AM No comments:

The Wood Duck is one of the most stunningly pretty of all waterfowl. Males are iridescent chestnut and green, with ornate patterns on nearly every feather; the elegant females have a distinctive profile and delicate white pattern around the eye. They are one of the few duck species equipped with strong claws that can grip bark and perch on branches.The Wood Duck nests in trees near water, sometimes directly over water, but other times over a mile away. After hatching, the ducklings jump down from the nest tree and make their way to water. The mother calls them to her, but does not help them in any way. The ducklings may jump from heights of over 50 feet without injury.
When females begin incubation, the male abandons the female and clutch and forms flocks with other males. By mid-summer the molting process begins for the male. The male loses his flight feathers all at the same time. This means they cannot fly and are at high risk of predation. During this time they move into remote places that are full of tall reeds where they can hide. This molting process takes up to four weeks. The male will have a more drab appearance and look similar to the female but maintaining bill color.
"First photo was taken at North Tazewell (Clinch River) on March 14, 2015 (migration arrival). The second photo was taken at Burkes Garden (Gose Mill Pond) on June 27, 2015. Note: In the 2nd photo's lower row, the second duck from the left is an example of a male in full molt." 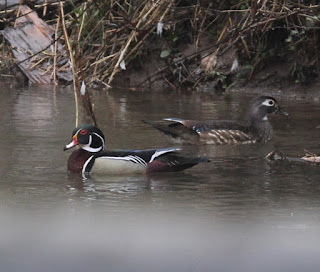 Posted by Birding in Tazewell at 5:42 PM No comments:

Ghostly pale and strictly nocturnal, Barn Owls are silent predators of the night world. Lanky, with a whitish face, chest, and belly, and buffy upperparts, this owl roosts in hidden, quiet places during the day. By night, they hunt on buoyant wingbeats in open fields and meadows. You can find them by listening for their eerie, raspy calls, quite unlike the hoots of other owls. Despite a worldwide distribution, Barn Owls are declining in parts of their range due to habitat loss.
Most birds cannot chew their food and owls are no exception. Owls and other raptors usually swallow their prey whole. They do not have a crop, the bag like organ used to store food after it has been swallowed so that it can be digested later.The bones, skulls, claws, fur and feathers and other parts of prey which cannot be digested are formed into a pellet which is regurgitated and dropped beneath their roost sites. Barn Owl pellets are compact and do not break apart upon impact with limbs or the ground. They make a good study of the owl’s prey types by opening them and inspecting the bones and the bird had eaten before the pellet was formed. 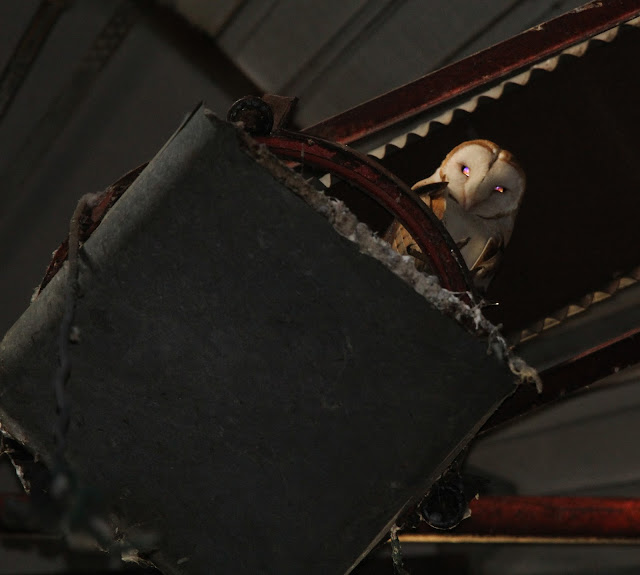 Posted by Birding in Tazewell at 5:06 PM No comments:

Now that the bird has left for higher grounds (Canada?), I can post the following message from my birding mentor (Wallace Coffey of Bristol, TN):

"A Marbled Godwit discovered and photographed (23 April, 2015) in Burke’s Garden of Tazewell County by Clancey Deel is one of the most rare spring shorebird records in Southwest Virginia’s history. Deel took the photo shown above at 10:16 a.m. along the shoreline of the MBC Ranch Pond located at the end of Litz Lane which is in the Southwest area of the valley. Marbled Godwits are extremely rare away from the Atlantic Coastal Plains of the state where they are mostly found. This very large shorebird prefer marshy grasslands and wet prairie habitats during the breeding season but spend winters on coastal mudflats, wetlands and beaches. In summer, they breed in central southern Canada from eastern Alberta to western Manitoba and as far south as central Montana and throughout South Dakota. An isolated breeding population is also found at the southern tip of Hudson Bay. In winter, Marbled Godwits migrate to both the Pacific and Atlantic coasts where they range from Virginia to Florida." 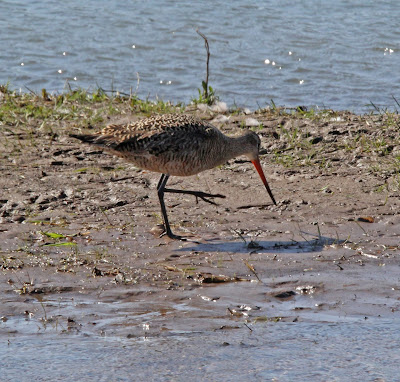 Posted by Birding in Tazewell at 7:27 AM No comments:

Birding in Tazewell
Became interested in birding (January 2014). Under the leadership of Bristol Bird Club, my hobby has giving me hours of enjoyment.